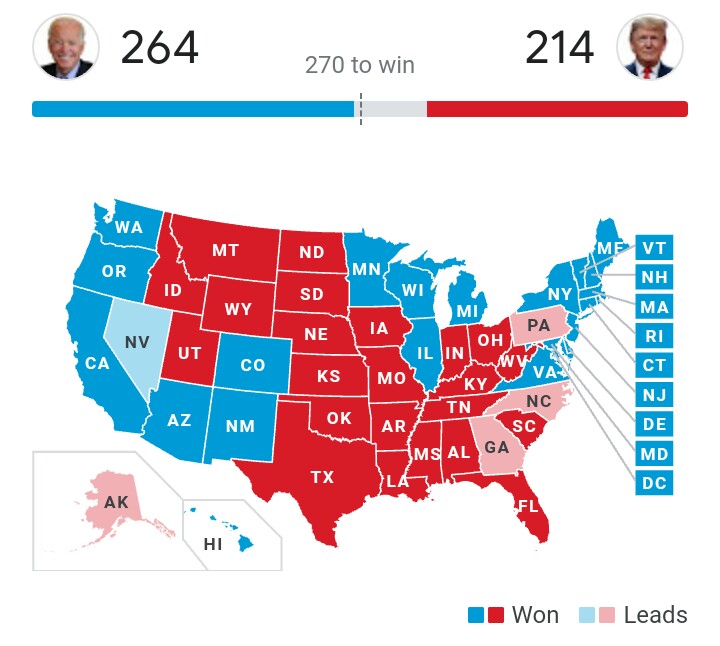 President Donald Trump and Democratic nominee Joe Biden seem to be in the home stretch of the fiercely fought race, but vote recounts in some key swing states could still determine who captures the crown.

Former Vice President Biden has managed to flip three states Trump won in 2016 – Michigan, Wisconsin and Arizona – but the president has vowed to have a recount in Wisconsin, and has filed lawsuits to stop vote counting in both Michigan and Pennsylvania, alleging irregularities and ”fraud.”

With Biden closing in on the 270 electoral votes needed to win, the Trump campaign filed lawsuits Wednesday in the key states of Pennsylvania, Michigan and Georgia. The lawsuits raised absentee ballot issues and requested observer access to ballot-counting locations.

In another hasty call on Wednesday, Trump’s lawyer, ex-New York City Mayor Rudy Giuliani, told a press conference in Philadelphia that Trump had won both Pennsylvania and the entire presidential election.

Eric Trump, the president’s second son, claimed that Democrats cheated by committing fraud and said the campaign will file a lawsuit to stop vote counting in the state.

As in Florida during the notorious 2000 election, which drew attention and derision worldwide, a recount can be sought in a US state to confirm that no errors were made during the initial vote count and to settle arguments of fraud and other irregularities.

In 2000, a recount had started in Florida, but the US Supreme Court ordered it halted, which handed the victory to Republican candidate George W. Bush over Democratic Vice President Al Gore.
Under Wisconsin state regulations, however, a recount cannot be requested until election results are verified on Dec. 1.

Confusingly for some foreign observers, in the US rules for voting are not set in Washington, DC, but at the state and sometimes local levels, requiring an examination of an array of different laws in cases of dispute.

Wisconsin state rules also dictate that a recount can be requested by a candidate if the race is separated by a margin of 1% or less. As of early Thursday, Biden was leading Trump in the Badger State by 0.7%, less than that margin.

In Michigan, the state conducts an automatic recount if candidates are separated by a margin of 2,000 total votes or less. As of early Thursday, Biden was leading Trump by more than 136,000 votes in the Wolverine State.

In Michigan, to get a recount by request, a campaign must submit a petition over alleged fraud or counting errors within 48 hours.

A recount in Pennsylvania currently looks unlikely since Trump leads Biden by 2.6%, and the state only provides an automatic recount if the race is separated by a margin of 0.5% or less, or if election officials find irregularities in the results.

However, there are still a large number of mail-in votes to count in the Keystone State, which have the possibility of tipping the race.

In other swing states, the Trump and Biden campaigns have not yet raised the possibility of seeking a recount.

Trump is ahead by 1.4% or 77,000 votes in North Carolina, another key state where it is possible for the president to still seek a recount since the margin is within 10,000 votes or 0.5%.

In Nevada, Biden is ahead by 0.6%, or 7,600 votes, where there is no automatic process but a candidate can seek a recount if he or she pays its estimated cost, but is reimbursed if the recount flips the election’s outcome.

Trump leads in Georgia by 0.4% or 22,000 votes, and without an automatic recount, a candidate can request one if the race is separated by a margin of 0.5% or less.