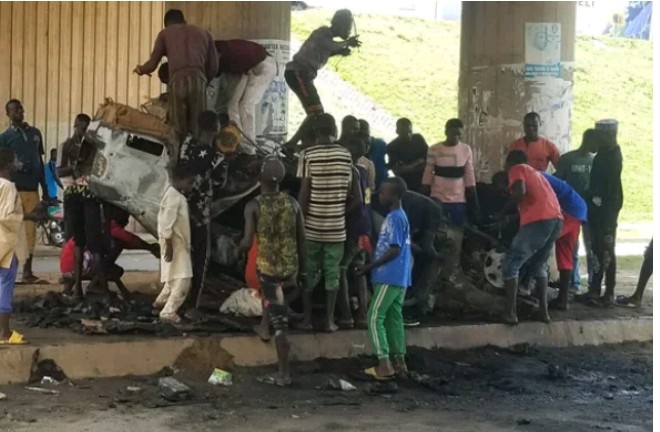 Three suspected kidnappers were burnt to death at the Dutse Alhaji area in Abuja on Monday, September 30th.

According to Eyewitnesses account, the men were apprehended after they allegedly pushed their female victim out of a moving vehicle when she began screaming for help.

A motorist who claimed to have witnessed the lady being pushed out of the vehicle, reportedly pulled over in front of the suspected kidnappers’ vehicle and blocked it under the Dutse Bridge.

Passersby and motorcyclists who also claimed to have witnessed what happened, immediately surrounded the vehicle.

Unable to answer their questions, the mob poured petrol on the suspects inside the vehicle and set them ablaze.

Efforts are currently being made to evacuate the charred remains of the suspects to the mortuary while the female victim was taken to Kubwa General Hospital for treatment.

While speaking on the incident, Mr Sylvanus Ekpenyong, Route Commander, Federal Road Safety Commission (FRSC) said that his men were alerted of the event by some people while on duty at Dutse.

“We were at Dutse junction and we got information that there was traffic building up before the Dutse Bridge because a vehicle was on fire.

“We rushed down there to clear the road only to see three dead burnt bodies and a burnt vehicle.

“When we made inquiries from eyewitnesses, they said it was one chance (kidnappers).

“So we are here to ensure free traffic flow of vehicles but we don’t know the exact group of people who burnt them,” he said.