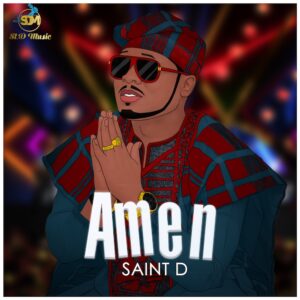 Sharing the inspiration behind the song, Saint D says “This is just what the world needs for the season. It’s all about celebrating all the Lord has done for us and dancing out our way from 2022 into 2023.”

“The purpose of this song is to affirm all that the Lord has done for us throughout the year.

You wanna use this song in every celebration (both physical and virtual gatherings) be its Christmas celebration, New year celebration, wedding ceremonies, graduations, Thanksgiving and many more.” – he concludes.

He is a six(6)-time Award-winning Gospel singer and minister who is also a member of the Loveworld Singers USA. He was born in Buea, the southwest regional capital of Cameroon and is presently based in Sacramento California.

Saint D obtained his B.Sc in Political Science and Public Administration from the University of Buea in 2008 and B.Sc in Marketing and technical management from ENSET University Douala-Cameroon in 2016 respectively.

On June 2016, he wrote his first gospel song, “He Restores My Soul,” after receiving a revelation from God at 12 midnight when his Man of God, Rev. Dr Pastor Chris Oyakhilome declared that month as the Month of Prayer and Meditation.

He has been nominated for several Award Ceremonies in which he came out as a winner with six (6) trophies of them. He has also been nominated as 237 Gospel Global Network Ambassador for North America Continent.

The new animated music video is shot at Obijive Empire Studios, with the song produced by DJ Icebeat Records.