Thousands of Protesters storm the street of Cairo the capital of Egypt, calling for the step down of President El-Sisi over corruption allegations.

The call moved from social media to the street on Friday night, marking some of the first demonstrations Egypt has seen since Sisi came to power in a military takeover six years ago.

Protesters, many of them young people, rallied in the capital Cairo, as well as several smaller Egyptian cities, chanting, “Sisi get out.”

Sisi, who ousted the country’s first democratically elected president in a 2013 coup, has shown zero tolerance for protest during his rule. Those who challenge his ban on unauthorized demonstrations are sentenced to lengthy prison sentences and face harsh punishments.

But Egyptians were spurred to the streets after calls on social media from Mohamed Ali, a former building contractor who worked with the country’s military.. Ali has posted a series of videos on Facebook accusing Sisi and other officials of misusing public funds.

Sisi has dismissed the allegations as “lies and slanders.”

On Friday evening, hundreds of anti-regime protesters gathered in Cairo, near Tahrir Square — the epicenter of the 2011 Egyptian Revolution — demanding Sisi’s resignation.

Police fired teargas to disperse the protesters, but the demonstrations raged on until the early hours of Saturday morning. Security forces could be seen using riot vans to chase demonstrators down a main thoroughfare in the capital.

“By just saying to Sisi in the street ‘get out’ in a crowd chanting, we are in front of a pivotal moment in the face of the rule of the military gang,” Amr Bakly, an Egyptian blogger and political activist, said of the protests in a post on Twitter. 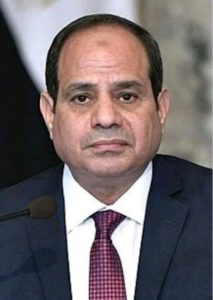