Kaduna State governor Mallam Nasir el-rufai has led by example by enrolling one of his sons in a public school in Kaduna.

The governor said his son, Abubakar Al-Siddique was enrolled in Kaduna Capital School in order to lead by example and also show his commitment to fixing the educational sector in the state as well  raise the standard of public schools. 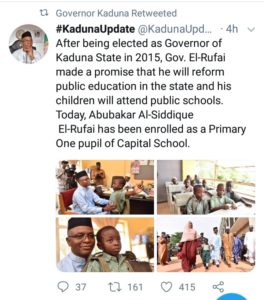 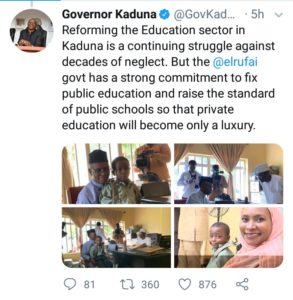 According to report, the school was renovated in 2018 to make it one of the best public schools.

A commissioner in the state Mr Aruwan, confirmed the act as “a fulfilment of what the governor said in 2017.”

Governor El-Rufai had in a state broadcast in December 2017 promised to enrol his child in a public school when he turns six years.

“The move is part of reforms to revamp public schools in the state to make them more competitive.

The governor also urged senior officials of the government to enrol their children in public schools.