Former Brazilian President Luiz Inácio Lula da Silva’s was released from jail to the great jubilation of hundreds of cheering red-shirted supporters.
Da Silva, 74, is appealing his conviction of corruption and money laundering in connection with the purchase of a beachfront apartment in Sao Paulo state.

He walked free from the federal police building in the southern city of Curitiba on Friday, less than a day after the Supreme Court ruled that a person can be imprisoned only after all the appeals have been exhausted.

Da Silva, known as Lula, embraced his daughter, raised his fist to the sky and made his way onto a stage surrounded by his partner Rosangela da Silva and others.

‘You have no idea the dimension of the significance of me being here with you,’ Da Silva told jubilant supporters, thanking individual union leaders and members of his leftist Workers’ Party. 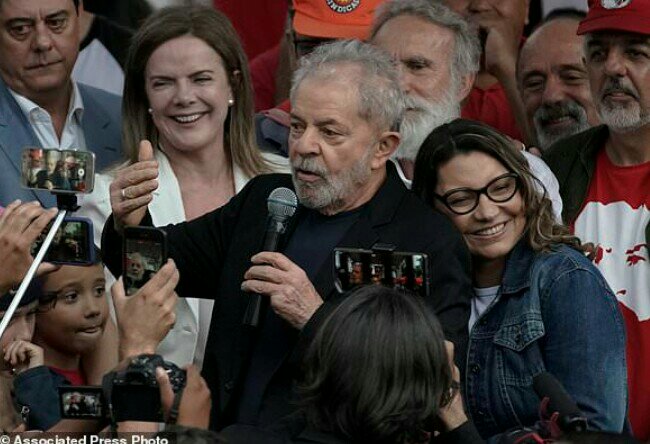 ‘They didn’t arrest a man. They tried to detain an idea. An idea doesn’t disappear.’

Brazil’s former President Luiz Inacio Lula da Silva holds the corner of a banner that reads in Portuguese ‘Lula is innocent’ as he speaks to supporters outside the Federal Police headquarters where he was imprisoned on corruption charges in Curitiba, Brazil
Da Silva had been jailed since April 2018. His release will likely reinvigorate an opposition weakened by corruption scandals, the impeachment of Da Silva’s hand-picked successor, Da Silva’s imprisonment and, more recently, a clobbering in the 2018 general elections.
It is not yet clear what political role he will seek now that he is free.

While he is barred from office as his appeals run their course, the former leader of the Workers’ Party remains a popular figure on the left. Still, he could find himself back in jail if his appeals don’t go his way.

His release also could rile conservative Brazilians, and possibly the government of President Jair Bolsonaro, who viewed his jailing as a blow against widespread corruption.

Lula’s 2018 jailing drove the two sides of Brazil’s already polarized society even further apart, and his release is set to reignite tensions.

Demonstrations in major Brazilian cities have been scheduled for this weekend to show support for the big ‘Car Wash’ corruption investigation that has sent dozens of prominent political and business leaders to jail, many of whom are expected to seek release under the Supreme Court’s decision. 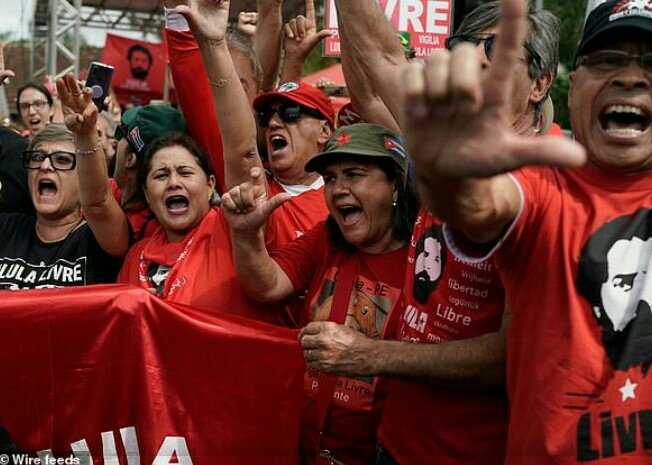 Da Silva, who governed from 2003 to 2010, had been favored to win the 2018 presidential election, but his conviction led to him being barred from running.

The former president has said that when free, he would travel around Brazil rallying opposition.

Political analysts say he might not immediately enter into a direct confrontation with Bolsonaro, seeking instead to influence the next presidential election in 2022.

‘The thing that makes Lula most dangerous to Bolsonaro is that Lula understands the long game,’ said James Bosworth, founder of Hxagon, a political risk analysis firm, stressing that the politician had run four times before being first elected in 2003.
‘Lula is an old school union and political organizer who is going to take his time placing PT (the Workers’ Party) and other allies into positions to take advantage of Bolsonaro’s weaknesses in the coming years,’ Bosworth said.

Da Silva presided over a period of rapid growth fueled by a commodities boom that expanded the country’s middle class. His huge Bolsa Familia welfare program helped lift millions from poverty, and he left office with an approval rating above 80%.

For Claudio Couto, a professor in political science at the Fundacao Getulio Vargas university in Sao Paulo, Da Silva’s release will have profound consequences on both sides of Brazil’s political spectrum.

On the one hand, it will serve Bolsonaro’s anti-Workers’ Party and anti-Da Silva rhetoric, Couto said. ‘On the other hand, it ends the PT’s ‘Free Lula’ rhetoric, and forces the party to take on another agenda.’
Though now out of jail, Da Silva remains entangled in several court cases. Aside from the beachfront apartment, he was also sentenced by a lower court judge in a case involving ownership of a farmhouse in Atibaia, outside Sao Paulo. If he loses his appeals in either conviction, he could find himself imprisoned again.

While departing the jail where he spent the last 19 months, Da Silva reassured his supporters in a brief Facebook live: ‘I’m going to work for the rest of my life to repay you, with gratitude, with love, with work.’