At least seven children have reportedly died and several others injured after a primary school building collapsed in Nairobi, Kenyan capital.

The wooden structure of the Precious Talent Top School in Ngando Dagoretti South collapsed barely few minutes after the start of the day on Monday the 23rd of September, 2019

Television stations showed images of rescue workers sifting through metal sheeting and slabs of concrete at the Precious Talent school, and carrying white body bags to an ambulance.

John Kiarie, a local lawmaker told pressmen the first floor of the building collapsed, trapping the children below.

The school’s director, Moses Ndirangu, blamed the collapse on the construction of a nearby sewer, which he said may have weakened the foundations of the building.

Kenya Red Cross say they have set up an information and tracing desk for people affected by the incident. 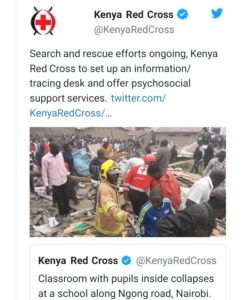 “There have been 57 students that have been taken to hospital for treatment, and we can also confirm that there have been seven fatalities,” said government spokesman Cyrus Oguna.

Images on social media showed hundreds of residents gathered around the site as rescuers search through the rubble. Books, desks and chairs could be seen amongst the debris. 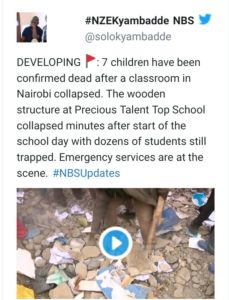 “I had just dropped my son to school and heard screams on my way back,” Margaret Muthoni, whose four-year-old son was injured, told the AFP news agency.
“I am just lucky my son survived,” she said.. 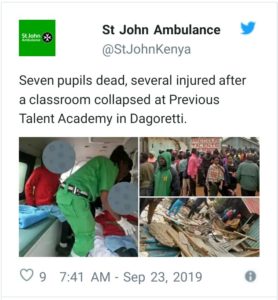 Related Topics:Kenyanairobischool collapse
Up Next