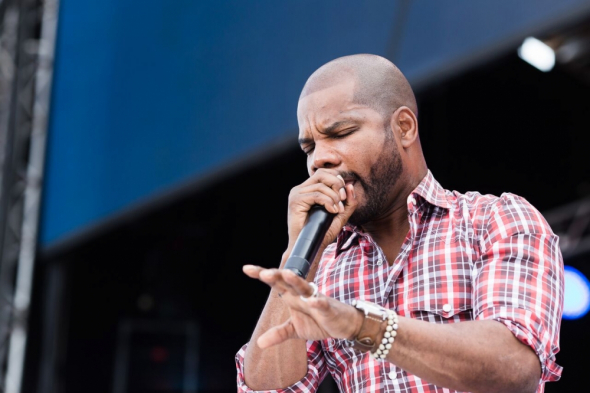 After Franklin spoke out against Pastor Saiko Woods who said his daughter dresed like a “wh—” and bullied his her online last week, the gospel musician admitted that public debates with other Christians leave him feeling fatigued.

“I’m tired. I really am, as a Christian having to fight all these other Christians publicly,” Franklin replied to music artist @RealTravisJames who seemed to try to defuse the social media dispute between Franklin and Woods. “NO ONE comes to me in love to discuss their feelings about ME. It’s always a public discussion from the ‘body.'”

Franklin said he is worn out by the public exchanges that he has been taking part in lately.

“It can create spiritual ‘fatigue,'” the gospel music executive wrote. “I know my heart for the Lord, my shortcomings and my desire. This public stuff from other believers is wearing me down.”

Franklin also engaged in a fiery Twitter debate last week when he spoke out against President Trump executive order placing a temporary pause on refugee resettlement for 120 days and blocks and residents of seven Muslim-majority countries from entering the U.S. for 90 days.

“I am a Christian who would rather sit at the table with a Muslim brother than ban him from a home that wasn’t originally mine,” wrote Franklin, who didn’t comment on Obama’s six-month ban on resettlement of over 58,000 Iraqis who were being considered foe entry in 2011.

But after one Twitter user brought Franklin’s daughter into the conversation by saying:

“@kirkfranklin I trust u’ll be leaving ur doors unlocked tonight. Oh & ur brothers want to know if u have a daughter,” the gospel music star made sure the critic knew not to speak about his child.

“Yes I have a daughter and the ability to protect her,” he wrote. “Please come so I can have a reason to introduce you to it in Jesus name.”

Last year, Franklin revealed that he felt that Christians crucified him on social media after an image surfaced of him collaborating with secular rapper Kanye Weston for the song, “Ultra Light Beams.” In an Instagram post, Franklin defended his friendship with West.

“Before one song was released, I was crucified because my brother asked me to take a picture. Again ‘no Kanye, you’re not good enough,'” Franklin said. “No. That is a dangerous message I believe we send to the world when our posture is they have to meet certain requirements before they are worthy to kiss the ring. It says people are not redeemable, forgivable or candidates for grace. To a lot of my Christian family, I’m sorry he’s not good enough, Christian enough, or running at your pace and as I read some of your comments, neither am I.”