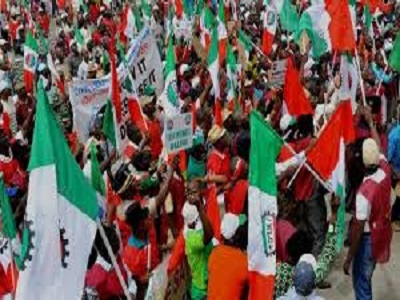 Discussions on the N30,000 minimum wage, which were suspended in some states in the wake of COVID-19 outbreak in March, would resume this week.

According to sources OKAYWAVES gathered that workers in no not less than eight states had yet to be paid the minimum wage nine months after the deadline the Nigeria Labour Congress gave state governments.

research indicated in states, where minimum wage negotiations had been concluded, workers were demanding fresh talks in view of the hikes in the fuel price and electricity tariff.

The Trade Union Congress said together with the NLC it would stage street protests in states where implementation of the minimum wage had not started.

It said such protests were held in Rivers and Ogun states, a few days ago, adding that workers would storm Imo State soon for the protest of minimum wage .

Although the new minimum wage bill was signed by the President, General Muhammadu Buhari (retd.), into law on April 18, 2019, both labour and the Federal Government did not agree on consequential adjustment of workers’ salaries until October 17, 2019.

In a communiqué issued after its meeting on December 11, 2019, the NLC gave state governments a December 31 deadline to conclude negotiations on the minimum wage.

we also discovered that the fuel price hike had brought to the fore the issue of minimum wage in states, where it had not been implemented.The Chairman of the Kwara State Joint Negotiating Council, Saliu Sulaiman, told The jorunalist that workers in the state had written the state Governor, ,Abdulrahman Abdulrazaq, asking him to sign the minimum wage bill and begin its implementation.

He said although labour leaders and the state government had agreed on modalities for implementing the new minimum, he said the payment was suspended as a result of outbreak of COVID-19 pandemic.

Sulaiman also said, “Apart from COVID-19, hikes in electricity tariff and fuel pump price have also made the current salary earned by workers in the state to be meaningless.”

“We met last week and one of the issues we discussed was the minimum wage which the government has yet to implement. We have written a letter to the governor to sign the collective agreement.”

Mean while in Sokoto State, the NLC Chairman, Ahmed Umar, in an interview with one of our correspondents in Sokoto said the state government began the payment of the new minimum wage in January.

He, however, said the payment had not started in local government areas because of the bloated “staff strength” in the LGAs.

in a similar development;

Also, the NLC in Ekiti State said the state government had not concluded talks with workers on the minimum wage.

The NLC Secretary in the state, Taiwo Akinyemi, in an interview with jorunalist h nee stated gotiations would soon resume in the state.

Akinyemi said since COVID-19 infection, which was the reason the negotiation was suspended was already thinning out, the NLC would write the government on the need to conclude the negotiation.

The Enugu State Chairman of the NLC, Virginus Nwobodo, on his part said the minimum wage implementation in the state had started.

He, however, said inflation had made a mess of it. “Enugu State Government has started minimum wage implementation.” He however, noted that the minimum wage had been greatly affected by inflation

OKAYWAVES learnt, the Bauchi State Chairman of the NLC, Danjuma Saleh, said negotiations with the state government had not been concluded before the COVID-19 lockdown.

He stated, “We reached an agreement six to seven months ago and workers from level six down have been getting the minimum wage. It is only salaries of senior staff from level seven upwards that we have not agreed on. We will soon resume the negotiations.”

The Gombe State Chairman of the NLC, Mohammed Adamu, said, “We have resumed talks but we have yet to conclude them. We have not reached the stage to plot a strike as we hope to conclude discussion on resumption of payment before the end of this month.”

Recall that Gombe is one of the few states that adopted the 30,000 minimum wage, but suspended its implementation due to the impact of COVID-19.

In Oyo State, we also gathered that the majority of the workers were being paid the new minimum wage.

He, however, said some departments, higher institutions and agencies were still taking the old salaries.
But the NLC in Ebonyi State is divided. The NLC Chairman, Ikechukwu Nwafor, who is recognised by the national leadership of the congress, said the state government had not negotiated with the state chapter.

Nwafor, in a telephone interview with our one of correspondents in Abakaliki said efforts of the NLC to negotiate with the state government failed.

Nwafor said, “I didn’t negotiate with the Ebonyi State Government. They didn’t allow negotiations. They called some people and made them to sign some documents.

“The people negotiated with them and agreed on a table that they have been using to pay people. They went and did it as a hidden thing when I was writing the governor to come up with a negotiation team and all of a sudden they said they had paid the minimum wage.

“The minimum wage is not being implemented in this state. We have the table and we can make it available for you; what Ebonyi has been paying before now, what it is paying now and what it should be paying after now.

The Zamfara State Chairman of the congress, Bashir Mafara, said negotiations on the minimum wage had been concluded but implementation had not begun.

The chairman said the committee set up by the state government had submitted its report to state Governor, Bello Matawalle.

Also, the Kano State Government has yet to refund salaries of workers it deducted for three months after it started the implementation of the minimum in December 2019.

A reliable source told The PUNCH that the state government promised to refund the deductions before the end of August 2020, but it had yet to fulfil the promise.

Recall that the state chapter of NLC, had on Wednesday, May 27, 2020 threatened to embark on a strike over the May salary pay cut.

A source said, “The state government deducted the workers’ salaries in May, June and July. It was only in August the deduction was not made.”

Following the dwindling revenues arising from the COVID-19 pandemic, the state government slashed workers’ salaries which the state NLC kicked against.

The state NLC while reacting on the development, had described the state government’s action as a violation of the existing minimum wage law 2019.

However, following an agreement between the union and the Kano State Government, the workers suspended their planned strike.

However, all efforts to contact the state NLC chairman, Kabiru Ado-Minjibir, to comment on the situation proved abortive.

But a competent source at the state ministry of finance said it was the labour union that was supposed to know when the workers’ money would be refunded.

Meanwhile, the TUC and the NLC have concluded plans to hold a massive protest in Imo State to compel the state government to implement the minimum wage.

The TUC President, Mr Quadri Olaleye, said the organised labour would soon arrive in the state in solidarity with the workers who he said were being denied their rights and benefits by the government.

according to sources on Monday on the refusal of about eight states to implement the minimum wage, the union leader said the TUC and NLC would deal with the errant states.

He stated that the unions had addressed the delay in implementing the bill in Rivers and Ogun States, noting that the former would start paying the minimum wage this month.

The TUC and NLC had planned a major street protest in Port Harcourt, the state capital, but it was shelved following calls for dialogue by the state government.

The meeting subsequently agreed on the implementation of the minimum wage, prompting the organised labour to shelve the rally.

Olaleye said, “I’m sure you are aware of what happened in Rivers State and Ogun states last week. We are taking it one by one. We have resolved that of Rivers state, they would start paying this month. The remaining five or six states, we are going to deal with them jointly with the NLC. Imo Sate is next, that is where the action would be.”

He also explained that the inability of some states to pay the minimum wage was part of the demands presented to the Federal Government during their meeting with the FG team on the hikes in the prices of petroleum products and electricity tariffs, in Abuja last Tuesday.

He added, “We already reported to the Federal Government in the letter of ultimatum we gave them that they should mandate all states that have not paid the minimum wage to implement it immediately.”

The TUC disclosed that the labour movement would again meet with the FG officials to further discuss the hikes in electricity tariffs and fuel pump price.

It said the government was expected to unfold its plans and palliatives to address the socio-economic impact of the increase on Nigerians.

The TUC leader stated, “We have not discussed those who have not been paying the minimum wage issue with the Federal Government, we only mentioned it during our presentation. So, at the meeting, they would give us their plan. I think we should be meeting by Friday this week.”