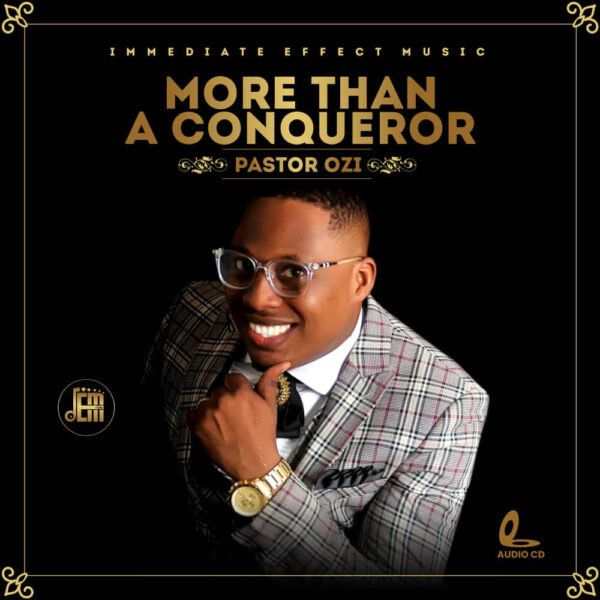 Versatile Nigerian Gospel music minister and a veteran of the Gospel music industry, Ozioma Osakwe popularly known as Pastor Ozi debuts his album titled “More Than A Conqueror”, after almost a decade. This album project is his first body of work and it is a wonderful offering.

“More Than A Conqueror” hits stores worldwide on Christmas day and it is a beautiful project. The 10 track album features production from Ace producer Joeblings who is at the helm on every song on the album.

The album which starts off My Paddy featuring Joeblings who also produces the song moves on to Onyedika Jehovah featuring Mike Isaac. The album title track More Than Conqueror steps up next and it is really a stand out track from the project.

More than a Conqueror is a testimony of how God brought Pastor Ozi back to life from a fatal accident on 22nd August 2012, while he was rushed to UNTH Enugu, he narrated that while he was on a neck collar, he heard shouts, as people lost their loved ones in the hospital, he heard them cry loud and wail, then suddenly, the ‘Song More than a Conqueror’ came from heaven while I was on the hospital bed.

The testimonial Levels Don Change featuring Unique Dblish & Salvation. The song which is both a Prophetic Song, at the same time, a testimony of God’s goodness in his life is meant for everyone going through tough times at the moment; they never last and God always comes through.

His single “Nobody Like You” which was a previous offering off the album is another wonderful tune and sees Pastor Ozi switching styles and dishing out some rap bars.

How Great You Are and Praise Medley round up the tracks on the album followed by instrumentals for My Paddy, Onyedikachi and Levels Don Change.

More Than A Conqueror is a fitting testimony for Pastor Ozi who survived a fatal accident several years ago. For the music minister who also wears many hats; a pastor, teacher, author, and others, this is the first step into a glorious journey.

Get Album Here: More Than A Conqueror – Pastor Ozi