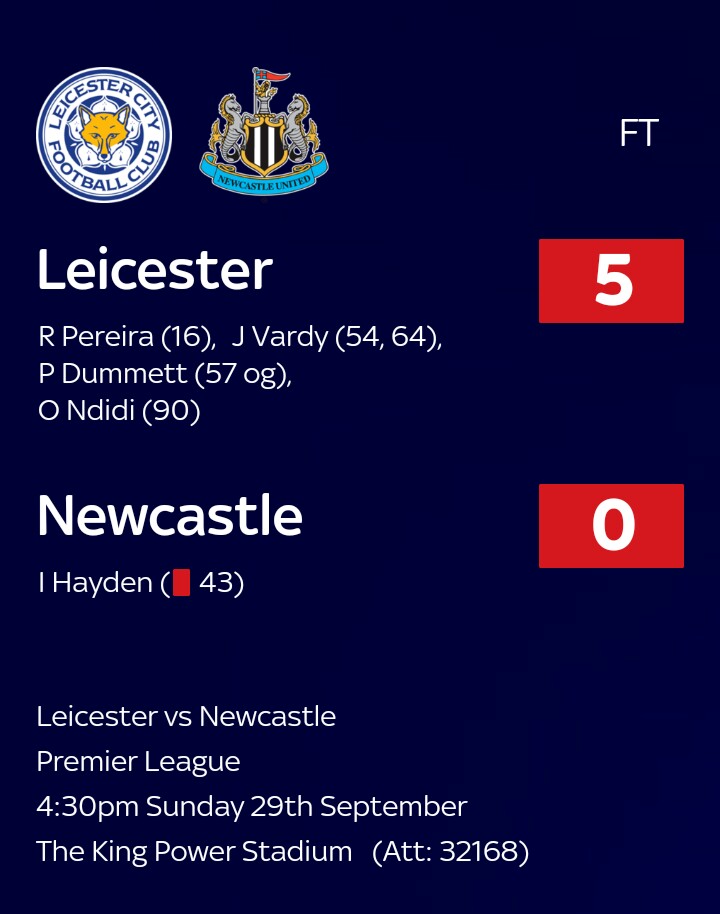 Leicester City earned their most comfortable win of the season after firing five goals past a 10-man Newcastle United side at the King Power Stadium. The Foxes displayed their dominance after taking the lead in the 15th minute and Isaac Hayden’s red card before halftime simply opened the door for them to run wild in the second half.
First Half

Leicester City deserved the lead going into halftime as they created more chances, enjoyed most of the possession (66%) and completed over 350 passes. Newcastle United failed to create any meaningful chances and Isaac Hayden’s red card in the 43rd minute only made matters worse for the Toon. Newcastle United looked good and alive in the opening 15 minutes, but the home side looked comfortable on both ends of the pitch for 45 minutes.

2′ – Ayoze Perez nearly opened the scoring for Leicester City just three yards away from goal, but the flag went up and Martin Dubravka managed to make a quick save on the line.11‘ – Newcastle United had a great chance to take the lead. Miguel Almiron set Isaac Hayden up for a shot from distance, but his shot curled to the feet of Yoshinori Muto, but the Japanese international wasn’t expecting the ball and it went out of play.16′ – Leicester City go up 1-0 through Ricardo Pereira as he dribbled past multiple defenders for 30 yards and just fired home a grounded shot from outside the box.29′ – Fabian Schar took a chance just over the halfway line after he saw Kasper Schmeichel off his line during a Newcastle United counter-attack. Schar’s effort was wide of the mark, but the pace on the ball certainly would have beaten Schmeichel if it was on target.42′ – Isaac Hayden received a red card for his tough tackle on Dennis Praet during a 50/50 duel. 42 minutes in and Newcastle United were down a goal and a player. Yoshinori Muto was subbed off for Ki Sung-yueng to add more support in the heart of midfield.47′ – Harvey Barnes cut between Fabian Schar and Ki Sung-yueng with pace to take on a shot from distance, but it went over the bar.

The second half was all Leicester City. Newcastle United had no answer for the Foxes and being a man down made the second half an insurmountable challenge. Leicester City spread the ball around well, created one dangerous chance after the other and got the job done against an inferior opponent.

54′ – Leicester City go up 2-0 after Jamie Vardy managed to score from a tight angle. There was plenty of power on the strike, but Martin Dubravka should have made the save at the near post.57′ – Another goal for Leicester City. Dennis Praet runs inside the box looking to deliver a cross into the middle, but his cross hit Paul Dummett and his deflection sent the ball into the net for an own goal.64′ – Jamie Vardy claims his second goal of the game after thumping in a close range header. This time Martin Dubravka was left helpless.90′ – Leicester City made it 5-0 through Wilfried Ndidi, who scored with ease from close range.

Newcastle United will host Manchester United next weekend. This will be an interesting game with plenty of urgency as both teams desperately need three point to climb the table. At the moment, both the Magpies and the Red Devils are in the bottom half of the table.

“We may have to abandon concrete to fight climate change,” architectural experts say