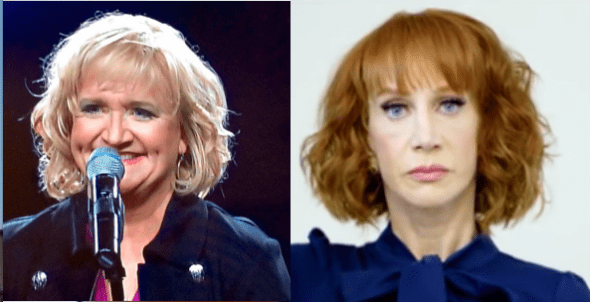 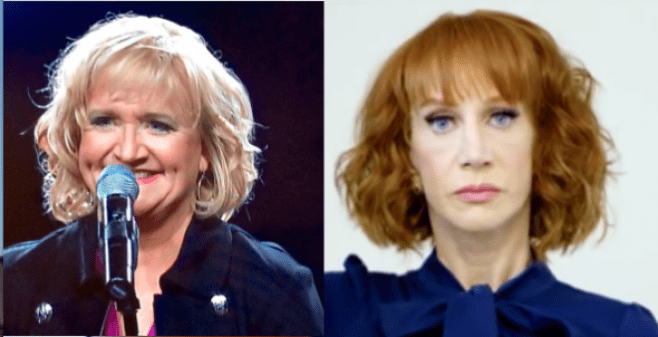 Griffin created a national uproar when she posed for a photo holding a fake severed head of the president on Tuesday. Hours after posting the picture and a video of her mocking the touble she might get in with teh Secret Service and joking that she might have to move to Mexico, she pulled the image down and apologized.

Some comedians, including Jim Carrey, came to her defense, saying: “It’s the job of the comedian to cross the line at all times,” Carrey told “Entertainment Tonight” on Wednesday at the Los Angeles premiere of “I’m Dying Up Here.” “That line is not real and if you step out into that spotlight and you’re doing the crazy things that (Trump) is doing, we’re the last line of defense. The comedians are the last voice of truth in this whole thing.”

Pierce, an Emmy-nominated and best-selling clean comedian, however, disagrees with Carrey and took to social media on Friday with her thoughts.

“I’m a comedian. I must own up to every word that comes out of my mouth. It’s not my job to ‘cross the line’ as Jim Carrey said in defending her,” the “Queen of clean” wrote on Facebook.

“Comics can hold a mirror up to society, we can push the envelope, but there is always a boundary. And right or wrong, there will ALWAYS be consequences.”

At a news conference Griffin held on Friday, the 56 year old and her attorney, Lisa Bloom, accused Trump and his family of “using their power to target her” but could provide any proof, except to say that some venues were canceling her shows and she was receiving backlash on Twitter, even from liberals and her mother was refusing to speak to her.

Pierce was not at all moved by Griffin’s tearful plea and believes she is the only one to blame for her troubles.

“So, now she wants to tear up and say Trump is ruining her career? (Is that yet another right-wing conspiracy!?) Sadly, I believe she started down that road of ruin in 2007,” Pierce added. She also linked to a video of Griffin’s 2007 acceptance speech at the “Primetime Emmy Awards” where she targeted Jesus.

During her speech Griffin said, “A lot of people come up here and they thank Jesus for this award.”

“I want you to know that no one had less to do with this award than Jesus,” she said. “He didn’t help me a bit. If it was up to him, Cesar Millan would be up here with that damned dog.”

Griffin continued, “So, all I can say is, suck it, Jesus! This award is my God now!”

Griffin was also fired by CNN and will no longer be hosting the cable network’s New Year’s Eve special with her friend, Anderson Cooper, who also said her ISIS-inspired beheading image was disgusting, which shocked Griffin, who thought Cooper would have supported what she did. She also lost an endorsement deal with Squatty Potty, a line of bathroom footstools.