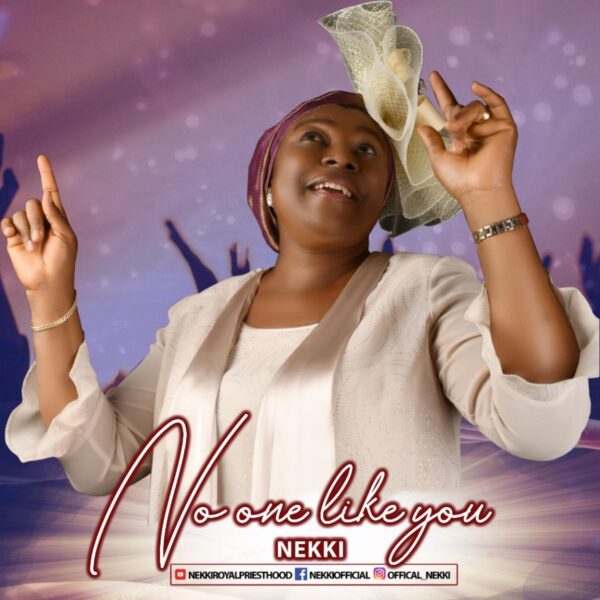 Gospel, contemporary Christian Singer, Songwriter, Nwafor Elizabeth Chinelo known professionally as Nekki is out with a new single titled “No One Like You”.
Nekki was born on Nov 12th 1969 in Limbe in the South West Province of Cameroon. She is the 7th of 9 siblings and began singing at a tender age while following her father to the St Peters Anglican Church choir rehearsals in Limbe.

Gradually she joined the St Peters Anglican choir in Limbe.
She came back to Nigeria in 1983 and in 1986 she got born again at a Reinhard Bonke crusade in Onitsha Anambra state. She began song writing the same year, and has written more than 120 songs.

In secondary school she and a group of other young girls started the Victory Gospel Singers group. While studying at the University of Nigeria, she joined the Abiding Word Gathering and later became the first music ministry cordinator of the Abiding Word music ministry in Enugu Campus. She is a life member of the full Gospel Buisness Mens Fellowship International ( FGBMFI ) and has ministered in many churches, conferences and conventions including the West Africa, Africa, and world conventions of FGBMFI.

Minister Nekki is married to Arch Mike Ikemefuna Nwafor, a seasoned minister of the gospel and they are blessed with six wonderful children.