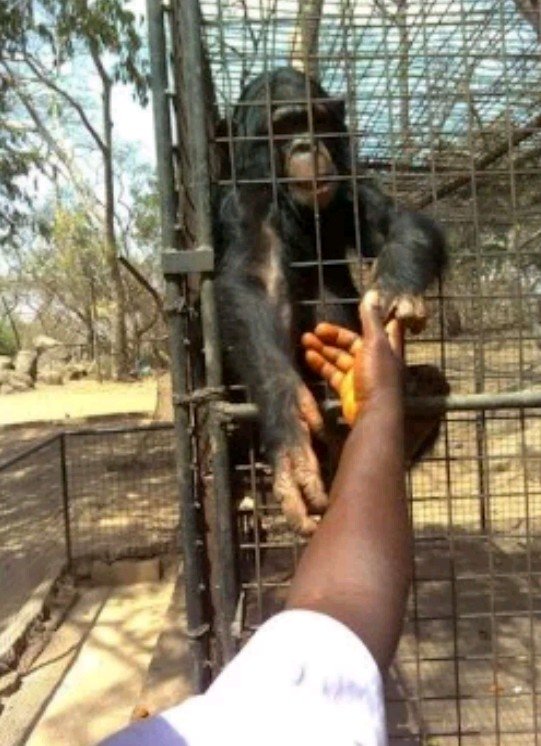 The only surviving Chimpanzee in the University of Nigeria Nsukka Zoo has died at the age of 50.
The revelation was made, on Wednesday, by Prof Chris Okoye, the Head of Department, Zoology and Environmental Studies.
According to him, staff and students of the department feel bad that the only surviving chimpanzee in the zoo has died, though as a result of old age.
“As the tradition of the department,the chimpanzee has been embalmed and deposited in the department’s Museum for practical and for people on an excursion to the museum to see.
“We do not eat or bury animals in our zoo when they die, rather we embalm and keep them in the museum,” he said.
The female chimpanzee, usually referred as his wife, died five years ago and since then the male had been lonely.
“Efforts to replace the female chimpanzee as well as some other animals that died in the zoo hit ‘brick-wall’ due to lack of fund,” he said.
On why zoos were gradually becoming extinct in the country, the HOD attributed it to low yielding revenue from zoos and very capital intensive to run and maintain.
“It costs a huge amount of money to buy animals like chimpanzees, lions, and elephants as well as to feed them.
“The N50 or N100 collected at the gate from visitors as the ticket is not even enough to feed these animals not to talk of maintaining them or getting a replacement when any of them dies.
“That may be the reason many people do not venture into zoo business because they know there is no profit in it; it is just for fun and sight-seeing.
He, however, said the zoo was very important as it protected endangered species of animals as well as served as a place for people to get connected to nature.
“Zoos play important roles in wildlife conservation, research, and education.
“Both federal and state governments should do something urgently to improve funding of zoos in the country else, in the next 10 years, zoos may completely go into extinction,” he said.

Jubilation As Notorious Serial killer “Blade” Is Arrested In Ogun