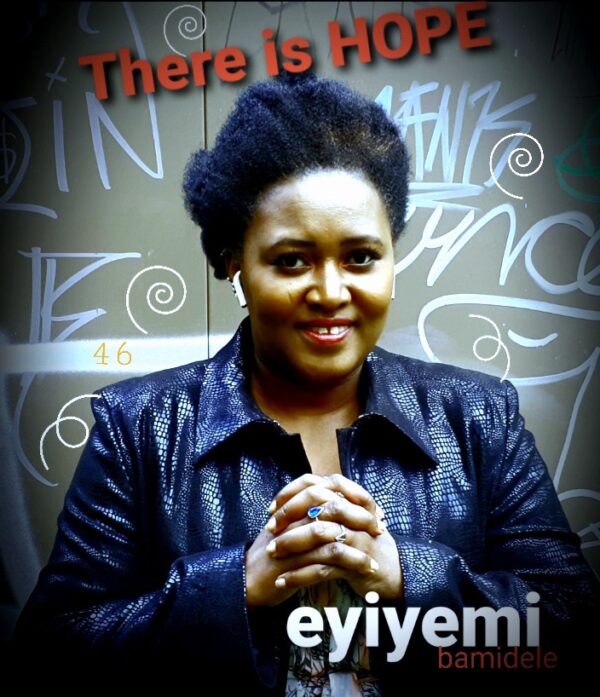 The Gospel music minister Eyiyemi BAMIDELE releases her much anticipated Album titled “THERE IS HOPE” a deep song of worship.

The year 2020 has been a challenging year in the history of entire human race with the global lockdown due to the coronavirus breakout claimed lives, resource and livelihood; coupled with the advent of Black Lives Matter.

It totally seems impossible to have a solace place to hide which is why this album is release to offer message of consolation and tell the world that there is HOPE even though it seems very hard for a lot of people.

Get Audio Here: There Is Hope – Eyiyemi

BIOGRAPHY
Eyiyemi Bamidele is a gospel singer/ songwriter/Music Minister, Humanitarian and an Entrepreneur with a passion for God and love for human life and support. From her secondary school she began her singing journey in her late teen age with MAMSER – a choral group of the Art and Culture arm of Lagos state government of Nigeria, with several stage performances as a group.

After-what, she joined her local church choir to maximize the use of her talent and became one of the lead vocalists in worship and praise; gave her the privilege to head the church choir. she later an evangelical ministry and serve in the music department. In 1998, She launched into her solo career in gospel music; and signed a contract with a record label called Odec Music releasing her first 15 Tracks Audio Tape Album titled “His Praise” in the year 2000.

She released her first audio CD Album- Good God in 2004 under Naomi Music record label followed with TV /Radio presences and interviews. Released the its video in 2008. She has been privileged to perform in different concerts and shows since her solo journey .

In 2010 she relocated to the United kingdom after signing a music work contract to help nurture the choir department of a newly found church domiciled in Manchester city of great Britain.

This work opportunity gave her the privileged to be a blessing and in continued use of her talents to edify the church of God.