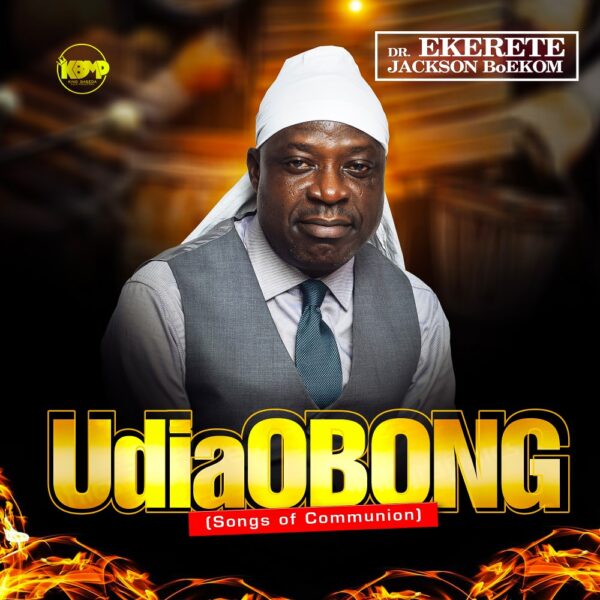 Dr. Ekerete Jackson BoEKOM: a Bible Doctrinal Personality, is the Founder of INTERNATIONAL LEADERSHIP ACADEMY in AKS, the Leader/ArchBishop/Pope. He release a new song titled “UdiaOBONG (Songs of Communion)” a great original composition in the genre of AKAM (Songs of Deliverance), both of which have been chosen for the INTERNATIONAL DANCE COMPETITION on Sunday 26th September, 2021 at InCHRIST CHURCH to celebrate AKWA IBOM STATE, NIGERIA, and advance the Gospel of Christ according to information on “how to participate & win the 1st, 2nd & 3rd prizes” available on Dr. Ekerete Jackson BoEKOM’s Facebook page.

UdiaOBONG (Songs of Communion) which is highly danceable, also beautifully challenges the agelong wrong doctrines peddled in the Churches due to gross ignorance by wrong Bible interpretation.

Produced by King Baseda, UdiaOBONG (Songs of Communion) fully loaded with Strong PROPHETIC utterances is truly confrontational just intended to cause a supernatural radical shift in people’s mentality away from traditional religious beliefs/practices unto the eternally secured finished work of Christ.

Dr. Ekerete Jackson BoEKOM operates from InCHRIST CHURCH located opposite OBO MARKET, off IDORO Road by PEPSI Junction, Uyo, AKS. He is the Founder/Director of Interdenominational BoEKOM MASS Choir, Lecturer/Researcher of Physical Chemistry at the University of Uyo, Nigeria: and is involved in several other issues to benefit humanity.

He has also released songs like LAMBANO, ONCE SAVED ALWAYS SAVED, GRACE TOOK ME OUT which are all listening delights for your spiritual growth.