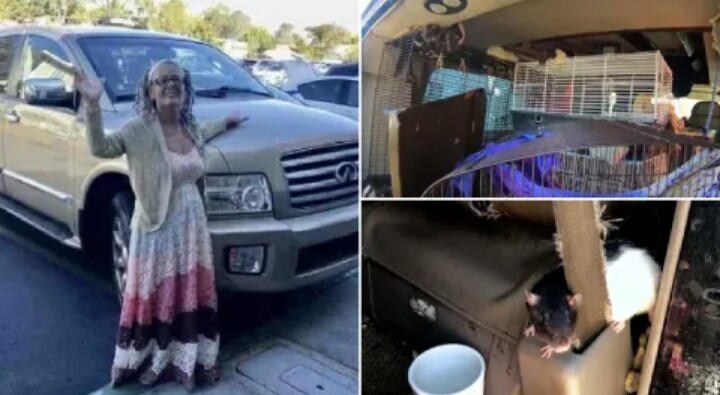 A woman lived in a van with her 320 pet rats until animal welfare officials asked her to give them up. The rodent lover, named as Carla, shared the small space with her furry friends in San Diego, California, until October 8. She started off with just two tame rats, but the animals quickly bred and ended up gnawing into the van’s upholstery, door panels, dashboard and engine wiring. Carla’s colony was busted after her rats began venturing outside of her van, to the consternation of the owners of a nearby convenience store. After being visited by the San Diego Humane Society, Carla voluntarily agreed to give up her pets, the San Diego Union Tribune reported. Captain Danee Cook, from the Humane Society, said the animal lover was not being cruel or neglectful, and had tried her best to care for the rats.

He said: ‘They could tell immediately that it was a huge amount (of rats). ‘They were living out of the van, coming and going. ‘This was not a cruelty case, this was a relinquishment, an owner asking for help. ‘She was feeding all of them, had water for all of them. Humane Society workers say Carla was not cruel to her pets, but could no longer cope with their sheer numbers after falling on hard times (Picture: San Diego Humane Society) ‘This didn’t meet the standards of hoarding.’ Cook said it took his colleagues days to rescue all the rats from the van, with the animals found ‘in every crevice.’ Boy, 8, and sister, 4, both found fatally hanged ‘after he was bullied at school’ Most of the 320 discovered were young, and many are pregnant, meaning the population would have further rocketeSociety is now offering up 140 same-gender pairs of rats for adoption at $5 for two. They explained that the animals make great pets but very sociable, and much happier when they have a pal to keep them company

Limiting mealtimes may increase your motivation for exercise