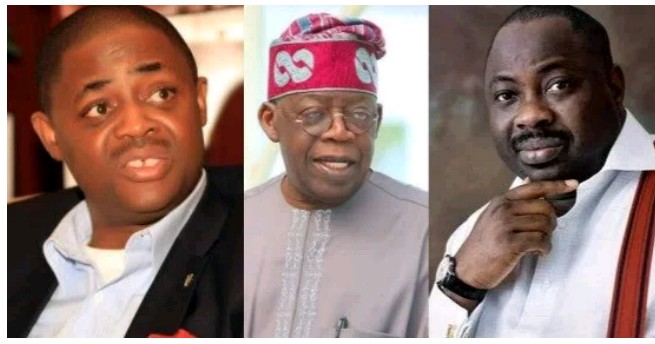 APC chieftain, Bola Tinubu trended on Twitter yesterday October 27, and this was largely because of an article written about him by publisher, Dele Momodu.

Momodu in the article gave reasons Tinubu, a former governor of Lagos state and national leader of APC, is eminently qualified to run for president in 2023.
Momodu in his article, said Tinubu like Buhari and every other Nigerian is not a saint. According to him, he would have wanted a younger person to run for President in 2023 but most of the young people who have been given an opportunity in politics have not justified the noise about “not too young to rule,” by ruling ‘senselessly and recklessly’.

If you ask me, I will tell you, unequivocally, and repeatedly, that Tinubu is eminently qualified to contest. If you ask me if he is a saint, I will say no. None of us is. Not even Buhari. Not you, not me. Nations are not governed by saints but by performers. That is one of the recurring theses that I regularly propagate in my musings and reflections. I have no illusions that Tinubu will definitely perform as President of Nigeria, if he ever contests and wins. He has a knack for identifying brilliant minds and fertile brains, and the ability to nurture them to greatness. He has demonstrated this repeatedly and almost endlessly. Examples abound without doubt.

Does Tinubu suffer from excesses and shortcomings? Perhaps, again like all mortals, he does. This does not diminish his greatness. His excesses are mitigated by several strong and positive qualities. He is generous to a fault. He has lifted many souls, old and young, from penury and perdition. He is a classic example of the Good Samaritan. We all have our shortcomings and why should Tinubu be an exception. Too many unprintable rumours, myths and comments have been circulated in writing and also spoken about him, some bordering on character assassination and unverifiable vilification, but God chooses and anoints those he wants. And no one can challenge God. It is obvious that Tinubu has been richly blessed, despite his apparent foibles. Such is life.

I have followed his trajectory for close to three decades. His story is a stuff of fairy tales. All those who have disparaged, derided, denigrated and despised him have not been able to bring him down, despite their monumental efforts to achieve this. When you think he is supine, broken and out, he rises, like the Black onyx and soars again. I witnessed this, live and direct, during our exile days. Many times, we all felt down and out but Tinubu’s passion and influence re-engineered things and made us redouble our efforts. The reason is simple. Tinubu has an uncommon audacity. I believe his bravery has taken him beyond his own imagination. A man who has survived too many tribulations like him cannot be an ordinary soul. God must love him dearly and extraordinarily. He has fought many battles that he won, spectacularly. He is naturally smart and adequately fearless.

A mutual friend once told a few of us that he is very sure Tinubu would still take the risk even if you say a particular venture will kill him. He has such kamikaze instincts. You can’t go far in life, if you’re too squeamish and Tinubu is a living proof that courage conquers all.

It is wrong to say Tinubu has no right to run for the Presidency in 2023. Who are those who will run if he does not? How are they better? What qualifies them to run that disqualifies him from running?

Yes, I may prefer younger people to take over but many of them we have seen have not justified the noise about “not too young to rule,” by ruling senselessly and recklessly. I’m now convinced that age should not be a deliberate barrier; track record of achievements should be the priority” the articel in parts read

After the article had gone viral, Femi Fani-Kayode took to his Twitter handle to call out a certain person who according to him must really hate Nigerians for campaigning for ”BAT” for president in 2023.
Well, Dele Momodu felt FFK’s tweet was directed at him and he immediately asked the former Aviation Minister where in his article he said Tinubu is the best bet for president in 2023. FFK immediately replied him.
See their exchange below.