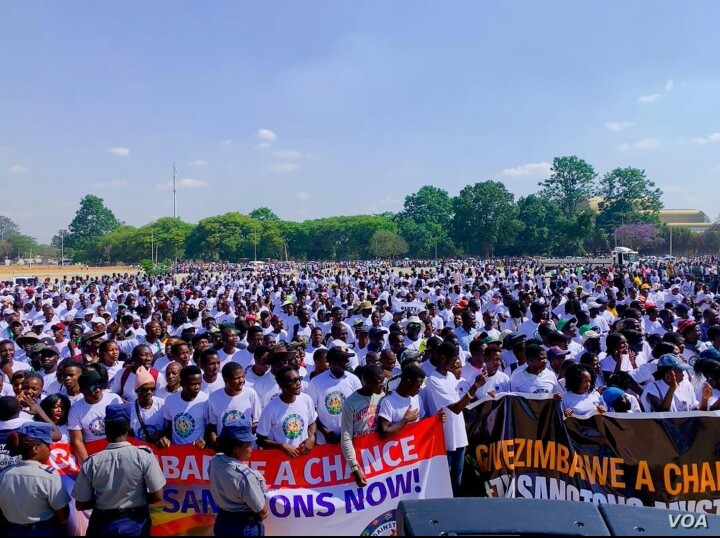 Thousands of Zimbabweans marched Friday in Harare to protest sanctions imposed on the country’s leadership for most of the past two decades.

Protester Gilbert Shumba says the sanctions are to blame for food shortages.

“Let’s go and destroy and kick these sanctions,” he said. “These sanctions destroy us, they are affecting me, my family, my kids, my dog, my rat, even that wizard which resides in my house, even that cockroach is relying on myself. When I am in hunger, all those things are in hunger.”

“As Zimbabwe, we are saying enough of these sanctions. These sanctions are making our people to suffer in big numbers, there is widespread poverty,” Mutodi said.

The United States and European Union first imposed sanctions on former President Robert Mugabe and dozens of his allies in 2002. The sanctions were a response to what then-U.S. President George W. Bush called a systematic campaign to repress dissent and undermine Zimbabwe’s democratic institutions.

The travel and financial sanctions targeted only Mugabe and his supporters, not the entire country. But Zimbabwean leaders, including current President Emmerson Mnangagwa, blame them for blocking development of Zimbabwe’s economy.

A public holiday was declared in Zimbabwe for Oct. 25, 2019, to allow schoolchildren and workers to join a protest against sanctions imposed on on the country’s leadership.

Ahead of the Friday march, Brian Nichols, the U.S. ambassador to Zimbabwe, told media that Harare needed to make changes for the sanctions to be lifted.

“If the government of Zimbabwe were truly interested in the issue of sanctions and considered this a major problem, rather than having a rally, what the government of Zimbabwe would do was make a chart of what the things that the international community is asking it to do, and then come with an argument, saying we have addressed the concerns that you have here with you,” he said.

Nichols added that the U.S. has asked Zimbabwe to repeal laws that critics say are used to stifle dissent and media freedom, but the laws remain on the books.

In addition, the ambassador said Mnangagwa’s government should address corruption, which he said is causing Zimbabwe’s economy to remain depressed.

over 20 killed as fresh protests in Iraq