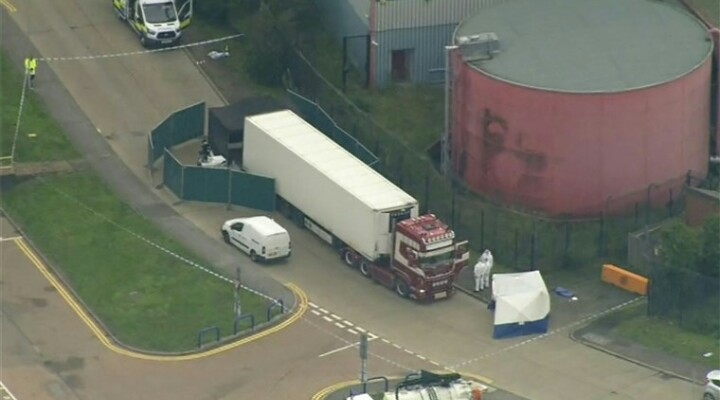 A 25-year-old man from Northern Ireland has been arrested on suspicion of murder.

An aerial view as police forensic officers attend the scene after a truck was found to contain a large number of dead bodies in Essex, South England,

LONDON — British police have launched a murder investigation after the bodies of 39 people were found in a truck container outside of London.

The container was discovered at an industrial park in the early hours of Wednesday morning local time, and all 39 people inside were found dead at the scene, police said.

A Police forensic investigation team are parked near the site where 39 bodies were discovered in the back of a lorry on Oct. 23, 2019 in Thurrock, England.Leon Neal / Getty Images

The driver, a 25-year old-man from Northern Ireland, has been arrested on suspicion of murder, police said. One of the victims was a teenager and all the rest were adults.

Prime Minister Boris Johnson tweeted that he was “appalled by this tragic incident” and said that the government would work with police to establish what happened.
l

802 people are talking about this

The truck was found at Waterglade Industrial Park in the town of Grays in the county of Essex, around 15 miles east of central London.

Police said they believed the truck came from Bulgaria and entered Britain on Saturday at the Welsh port of Holyhead, which links to Ireland by ferry.

“We are in the process of identifying the victims, however I anticipate that this could be a lengthy process,” Chief Superintendent of Essex Police, Andrew Mariner, said in a statement.

Priti Patel, the U.K.’s interior minister, tweeted that she was “shocked and saddened by this utterly tragic incident.”

Related Topics:breaking world newscurrent world newsnews around the worldnews headlinesnews watch
Up Next