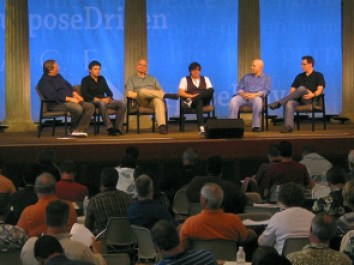 Ninety-six percent of pastors who are married are satisfied with their spousal relationship, according to a study by the Barna Group, which looked at how hard ministry is on pastors’ families, among other things.

Seven out of 10 married pastors say their relationship with their spouses is excellent, and one-quarter consider it good, said the Barna study, conducted in partnership with Pepperdine University and released this week.

Among all married American adults, less than half rate their marriage as excellent, and one-third say it’s good. “So, by and large, pastors report greater marital satisfaction than the general population,” the study noted. Also, while only about 10 percent of Protestant pastors have ever been divorced, the percentage is 27 percent among all U.S. adults.

The study also found that pastors with leaner resources tend to report a stronger connection with their spouse. Eighty-three percent of those earning less than $40,000 a year rate their marital satisfaction as excellent.

Pastors who are high on burnout risk or at high spiritual risk are more likely to rate their marriage as average or below average, and to say their relationship with their children is merely average.

On the church tenure’s impact on pastors’ families, the study found that those who report low overall vocational satisfaction or low satisfaction with their current church ministry are much more likely than the norm to say it’s true that ministry has been hard on their family.

“The effect of ministry on a pastor’s family, whether positive or negative, is tied to the pastor’s ministry satisfaction,” Barna noted.

On making and maintaining close friendships, the study found that two-thirds of pastors are happy with their friendships, rating their satisfaction as either excellent or good.

However, there are some areas of concern. “First, note that only one-third of pastors expresses the strongest level of satisfaction with their friendships. Second, around one in three indicates comparatively low satisfaction in this area. And third, pastors’ satisfaction with friends is on par with or only slightly better than American adults overall (28% excellent, 33% good),” the study revealed.

Overall, older and more seasoned ministers report higher levels of satisfaction than younger and greener pastors, the study noted, adding that leaders making less than $40,000 per year are also more likely to report high satisfaction when it comes to friends.

“Our researchers observed some weaknesses in relationships among younger church leaders,” said Brooke Hempell, vice president of research at Barna Group. “It may be that younger pastors, who are establishing not only their ministry but also their marriage and family, have limited relational resources to invest in close friendships.”

Among other findings, 68 percent of pastors say they receive direct personal spiritual support at least monthly, and more than half of those do so “several times a month or more often.”

About 60 percent of pastors say they are primarily responsible for setting the vision and direction of the church and 35 percent say they are part of a team that develops the vision and direction together. However, most senior leaders do not lead alone, the study found. Eighty percent of them report to a board of elders or similar group of laypeople.

Tyrese Gibson Says He Was a Born-Again Virgin Before Wedding

“Are you really saying that only Christians will make it to heaven? READ Pastor SEGUN’s Answer.