The Governor of the state, Dr Ifeanyi Okowa disclosed this at an event, the government said on its Twitter handle on Sunday.

According to a series of tweets, Governor Okowa spoke at a thanksgiving service by the deputy governor, Deacon Kingsley Otuaro, in Effurun.

The governor noted that the state government had gotten approval from the Federal Government on Thursday last week to fix the roads.

He added that the stated contractors has been drafted to the affected sites to commence rehabilitation of the roads.

The Governor stated that work had already begun on the Benin-Sapele Road as well as the Asaba side of River Niger Bridge on the Asaba-Onitsha Highway.

He said measures were being put in place to also rehabilitate the Agbor-Abraka-Eku Road which noted was also in a deplorable state. 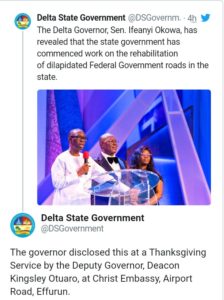 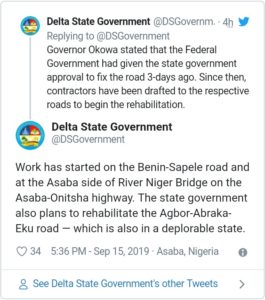