The police have arrested one Emeka Emmanuel with a fake identity card of the Economic and Financial Crimes (EFCC) at the Iyana Iba area of Lagos state.

A statement from the State Police Command on Sunday said operatives also arrested suspect cultist, Emmanuel Olatunde, also known as pastor in the Bariga area of the state.

According to Mr Bala Elkana, the command’s spokesman, 29-year-old Emeka was apprehended on Saturday night by operatives of the Ojo Police Station while acting on credible intelligence

The suspect was in possession of a fake EFCC ID card which he uses in parading himself as an EFCC operative. The suspect duped innocent citizens under the pretence of providing them employment with the EFCC as operatives.

“One Olaposi Semiu ‘m’ of Agbara, Lagos who is one of such victims. He told police investigators that the suspect collected the sum of N51,000 from him over a month ago with a promise of securing employment for his son as an EFCC operative,” he said.

According to him, the suspect who was also found to be operating an illegal medical facility in his residence confessed to committing the crime

Also recovered from him were medical equipment and fake certificates. Elkana said the suspect would be charged to court as soon as investigation is concluded

He also advised members of the public, especially job seekers to be mindful of the activities of such people in order not to fall prey of their antics.

On the other hand, 31-year-old Olatunde was arrested following sustained monitoring at Oremenunu Ibafo Street in Bariga.

The suspect, according to Elkana, is an ex-convict and is a high ranking member of Eiye Confraternity, terrorising people in Bariga.

“He (Olatunde) has a link with a series of robberies and murder cases in Bariga. He is responsible for the murder of one Ahmed Karowi, an Aiye Confraternity kingpin on 11th September 2019,” he added.

Elkana said the suspect would also be charged to court as soon as they conclude investigation. 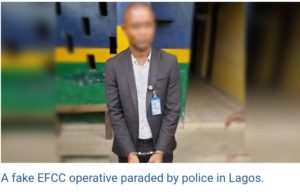