Femi Falana, counsel to the convener of revolution now movement has decried the refusal of the Department Of State Service (DSS) to release his client despite meeting bail conditions.

Channel TV reports that Mr Falana explained that no reason has been given by the agency for its failure to comply with the court order delivered on Tuesday, September 24, 2019.

Justice Taiwo Taiwo had in a court sitting in Abuja ordered the release of Mr Sowore who is the publisher of Sahara Reporters.

“The liberty of all Nigerians high or low, poor or rich is guaranteed by the constitution. It’s for this end that I’m of the view that the defendant ought to be released forthwith,” Justice Taiwo of the Federal High Court in Abuja said.

His lawyer, Femi Falana told CNN on Tuesday that his client is being held illegally and accused the government of bringing up trumped-up charges against him.

“We are saying the machinery of the state cannot be used to harass political opponents,” Falana said.

Meanwhile in New York, Sowore’s wife, led protesters to the United Nations Plaza where President Muhammadu Buhari is attending the 74th UNGA submit, to plead for her husband’s freedom. 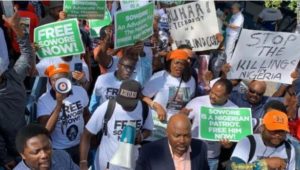 “It is very sad to see the cause of action this has taken in the past one and a half months, especially for someone that was calling for a change for the better in Nigeria,” she said.

Ope Sowore told CNN she has been allowed only two phone conversations with her husband since his arrest last month. The journalist was supposed to be in Nigeria for two weeks in July and their two children miss their father, she said.

“It’s been almost two months since he walked out the door. Children are resilient in times like this, but they miss their father and are really hoping for his safe return,” she said.