An aid worker with the action against hunger, a French based agency kidnapped by Boko Haram in July 2019 has been killed by the terrorists.

The Nigerian aid worker was captured along side, a woman and four other men, in July by Islamic State West Africa Province (ISWAP) during an ambush on their convoy close to the border with Niger.

French based agency announced in a statement the execution of the victim withholding the identity.

“The armed group holding captive an employee of Action Against Hunger, two drivers and three health ministry personnel, have executed a hostage”, they said.

“Action Against Hunger condemns in the strongest terms this assassination and urgently calls for the release of the hostages.” They continued.

The charity said it was “extremely concerned and is fully mobilised to ensure that the remaining hostages can be quickly and safely reunited with their families”.

Ahmad Salkida, a journalist, who has access to the group gave reasons for the execution on his twitter handle.

According to him, the terrorists killed the abducted aid worker because the government deceived them. 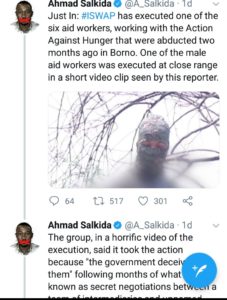 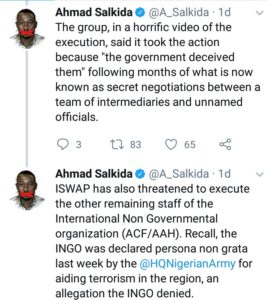 ISWAP is a splinter faction of Boko Haram that swore allegiance in 2016 to ISIL leader Abu Bakr al-Baghdadi. It has repeatedly attacked military bases and targeted aid workers in northeast Nigeria.

DSS Yet To Release Sowore, Falana(SAN)