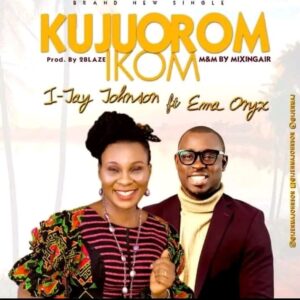 Abuja-based Nigerian Christian music artist, singer and songwriter Ijenma Johnson-Ejiasa most known as I-Jay Johnson drops brand new single titled “Kujuorom Ikom”, a prayer for God to purge and make us good and honorable vessels for God’s use as seen in 2Timothy 2:21.

Only good & honorable vessels can get filled as Matthew 9:14-17 made it known that No one puts new wine into old wineskins.

This song is also a heartfelt prayer for everyone desiring a change, uplifting from God. Continually cling unto God, get purged & become an honorable vessel that would be filled and running over as promised in Psalms 23:5b.

The title of the song “Kujuorom Ikom” is translated to mean Fill My Cup.

Speaking about the inspiration behind the song, the singer revealed that at a point where she was praying & asking God for an uplift in life was when the song came to her like an answer to her prayers.

Alongside herself in this new song is Ema Onyx the voice behind the award winning & life changing song You No Dey Use Me Play. The Tublaze produced song was rendered in English & Igbo language.

Minister I-Jay Johnson is happily married to her heartthrob and their union is blessed with beautiful & amazing children.