It must have been a very scary moment for Manchester United and their fans in the early stages of the game, as the Saints pressed United high up, depriving them of space and time on the ball, something the Red Devils struggled with. The central defensive pairing of Victor Lindelof and Harry Maguire as well as goalkeeper David De Gea had trouble passing out from the back, as they had done in their previous three games.

With Southampton’s 4-2-2-2 formation, it choked United and starved them of spaces in central areas, forcing the Red Devils to often hoof the ball forward as they were no passing lanes for them to do their short passes. It looked as though Ralph Hassenhuttl had the perfect approach, as they hounded Paul Pogba, who in turn lost the ball on a number of occasions. 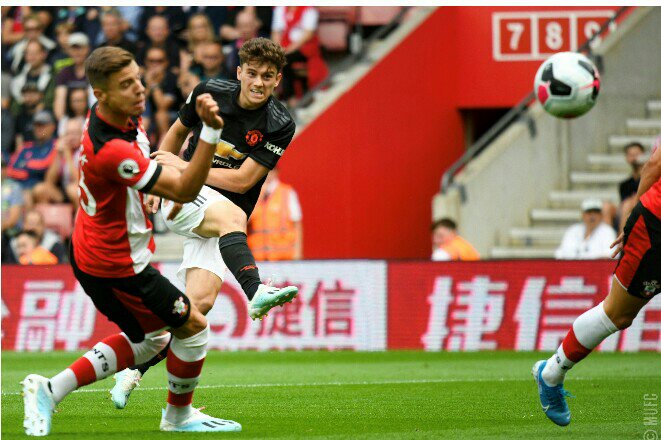 James scores an astonishing curler to give United the lead.

But United seemed to be getting a foothold from the seventh minute, as Southampton appeared to slack off a bit, opening up more passing channels for United to exploit, which they tried to do. However, it was the Saints who went close in the eighth minute, Sofiane Boufal had a shot that went close after receiving a good pass, but the effort was wide in the end.

James wheels away after scoring to give United the lead.

Two minutes later, however, United would go in front, when Scott McTominay displayed great vision and sent a pass to James, who showed brilliant composure inside the box to bury the ball into the top right corner. What a goal that was!

It must be said that before that goal came, United had looked better than they started the game, and had begun finding spaces in between Southampton’s midfield. At the time the goal arrived, the Red Devils were on ascendancy.

Romeu chases compatriot Juan Mata as the United midfielder looked to create a chance for the Red Devils.

However, that goal appeared to have given the Saints a rejig, as Hassenhuttl had them re-enacting their tight shape through the middle, denying United space and time. As the clock ticked, Aaron Wan-Bissaka pounced on a great cross inside the box, but lashed his powerful first-time shot inches over the bar.
Meanwhile, James continued to look impressive as he latched on to a precise defence-splitting pass and fired a nice strike from a promising distance towards the roof of the net. But goalkeeper Angus Gunn had a clear sight of it and made a comfortable save.

In the end, it was a half that could easily have gone either way, but United would have been grateful to have gone into the break with the lead.

At the restart, United looked more in control, Marcus Rashford came close to scoring but should have done much better. His poor attempt from close range ended up in the gloves of Gunn. But at this point, Southampton were looking more dangerous and putting United on the edge.

Manchester United players look to restart the game after conceding an equalizer.

All that pressure and intensity would pay off after 58 minutes, Vestergaard burst into the box to get on the end of a whipped in cross from Kevin Danso and scored magnificently from close range into the left side of the goal, moments after De Gea had made a beautiful save. United were heartbroken here.

Proceedings afterwards was more of a roller coaster, with Ole Gunnar Solksjaer looking to change their fortunes with the introductions of Nemanja Matic and Jesse Lingard for Juan Mata and Andreas Perreira and that seemed to spur United on, as they launched a spate of attacks on the Southampton defence.

That would appear to pay off as McTominay was fouled by Danso, and the defender was subsequently showed a second yellow and a red card as the Saints were reduced to 10 men. This gives the Red Devils a numerical advantage. Will it translate to goals advantage? 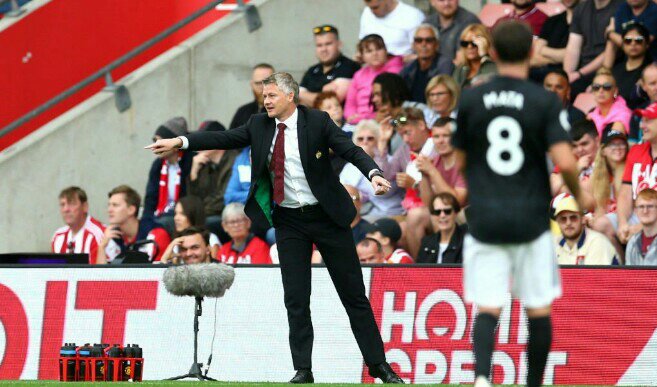 Juan Mata walks off after being replaced by Nemanja Matic.

Well, it seemed that much as United continued on the front foot, pressing Southampton and pushing for another goal.
But after 90 minutes United were held to a 1-1 draw by Southampton.

Its going to be Battle Moussa Sissoko warns Spurs against Arsenal.