The National Stalwart of the All Progressives Congress, Bola Tinubu and Abiy Ahmed,Prime Minister of Ethiopia, have won the African Democracy Award.

The duo were recognised for their commitments to democracy, freedom of speech and socioeconomic and political developments of their countries.

The award was conferred on them at the 4th African Political Summit and Diamond Awards in Addis Ababa, the Ethiopian capital.

The award was said to be the highlight of a three-day conference on Campaign Financing and Elections in Africa, an initiative of the Association of Political Consultants, Africa.

According to the president of APC Africa, Kehinde Bamigbetan,the award  “serves to recognise and encourage icons of democracy and good governance in Africa. It has been our culture to celebrate those political figures who have done a lot to promote democracy in their respective countries.”

Abiy Ahmed was recognised as an outstanding leader who had done a lot to strengthen democracy, human rights, press freedom and peace in East Africa.

He said: “The prime minister won this award because of the tremendous works he has done in Ethiopia since he came on board. He opened up the political space and freed dissidents who were in jail.“We also believe that a leader who has done so much to broker peace in Sudan deserves to be recognised.” 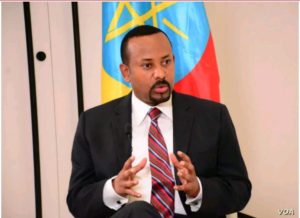 Bamigbetan said Tinubu was recognised for his commitment to democracy and human rights.

“Asiwaju is a political figure whose impacts have been felt not just in Nigeria, especially with the historic election of President Muhammadu Buhari on the platform of the opposition APC, but also across many countries in Africa,” “He has continued to work to deepen democracy and good governance.” he added.

CCTV Captures killer As Another Lady Dies In Port Harcourt